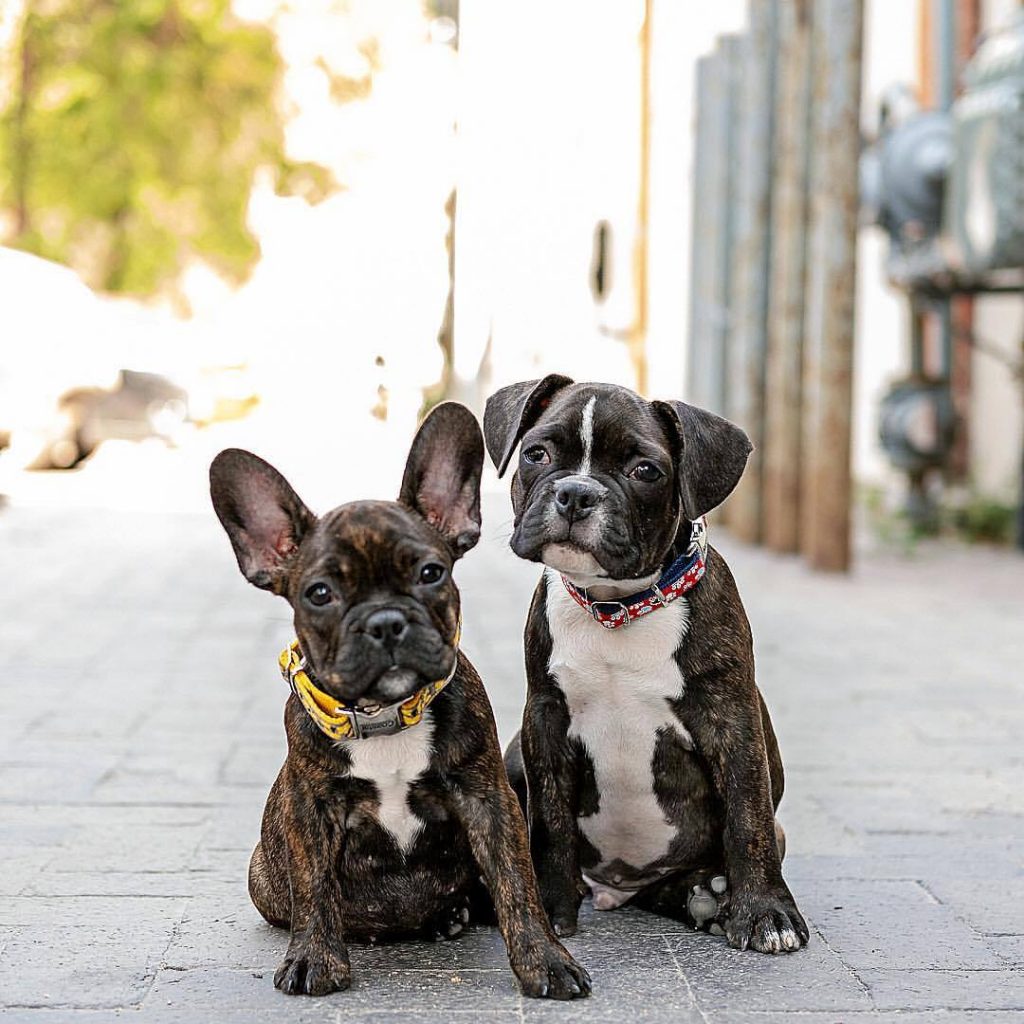 We know that we love our Frenchies, and love everything about these funny little dogs. Purebred Frenchies are often sought after by lovers of this breed. However, there is a lot to be said for a long of French bulldog mix dogs of all ages. Not only do they tend to embody the best features of our little beloved Frenchies, but they also have some of the great physical and personality features of the other half of their mix.

Some of my favorite Frenchie mixes have some really great characteristics that you simply can’t find in other dog breeds, whether purebred or mixed. Whether you’re adopting from the shelter, or getting a mixed puppy from a breeder, you’ll find that you’ll love your little mix just as much as you would a purebred Frenchie.

Often referred to as the “Frenchton” this little dog brings with it a fun and sassy personality. As both breeds are on the smaller side, the Boston Terrier French Bulldog mix won’t exceed 25lbs in weight, and at his shoulders isn’t likely to exceed 16 inches. You’ll find his coat to be in the same colors you’d find in both breeds, cream, brindle and white as examples.

Both breeds are sweet and energetic companion dogs, and the Boston Terrier French Bulldog mix should prove to be eager to please and easy to train. The French Bulldog lineage may add a streak of stubbornness in there, but you’ll find it’s overshadowed by the great temperament of the mixed pup.

The combination of the French Bulldog and the Chihuahua could result in a number of different looks and shapes for your mixed pup. By and large, the French Bulldog Chihuahua mix is a stocky dog, with a head that is proportionately larger than it’s little wide-chested body. The Chihuahua can be a little snippy and short-tempered, particularly around small children. The combination of the two personalities from each breed can result in a French Bulldog Chihuahua mix that is excitable, energetic, and does love being a part of the family.

Affectionately called the French Boodle, the French Bulldog Poodle mix embodies the most desirable physical traits of each breed, often resulting with a small fluffy companion that is a great addition to any family. This mix brings with it the intelligence of the poodle, with the charming personality of the Frenchie. He shouldn’t exceed 25lbs, nor should he grow taller than 15 inches at the shoulder. The French Bulldog Poodle mix is one of my favorites, and wonderful to have around children.

The Corgi is a bit larger than the Frenchie, so you may find that the French Bulldog Corgi mix exceeds 25lbs when fully grown. He is going to have a slightly elongated body, with the characteristic stocky Corgi legs and overall look. The personality of the French Bulldog Corgi mix will of course bring with it the sweetness of the Frenchie, but also infuse into the pup the playfulness and overall intelligence of the Corgi. As both of these breeds make great companions, you’ll find that this is a mix that is a great option for families with children of all ages.

Don’t let the Pitbull in the French Bulldog Pitbull mix make you shy away from this charming pup. Pitbulls are amongst the most intelligent and affectionate breeds. Combining the two will get you all of the wonderful characteristics of each breed, in a smaller form. With the stocky chest of the pitty, and the funny little face and ears of the Frenchie, how can you really go wrong with an energetic and happy dog that will be a terrific companion for every member of the family. There’s no really good way to determine how big your French Bulldog Pitbull mix will grow to be, but he shouldn’t exceed 35lbs.

The French Bulldog Husky mix offers the unique coat of the Husky, with the shorter stature of the Frenchie. The Husky is a working breed, so you may find that your mixed pup is somewhat more energetic than you expected. Taking him for daily walks, and playing with him in the afternoons after work will help him to burn off that excess energy. The French Bulldog Husky mix could have a smooth coat, or something between smooth and the fluffy coat of the Husky. The blue eyed trait of the Husky is very often seen in the mixes, which is something adorable and striking all at once.

Sometimes called a Frengle Hound, the Beagle French Bulldog mix pup is an interesting combination of the two. Your little mix will have the stature of the Frenchie, but often feature many of the facial characteristics of the beagle. Each breed is friendly and eager to please, so you’ll find that the Beagle French Bulldog mix is a great little companion for every member of the family. He shouldn’t exceed 25lbs once he is fully grown, and with plenty of exercise he’ll prove to be a smart and charming addition that is easy to train.