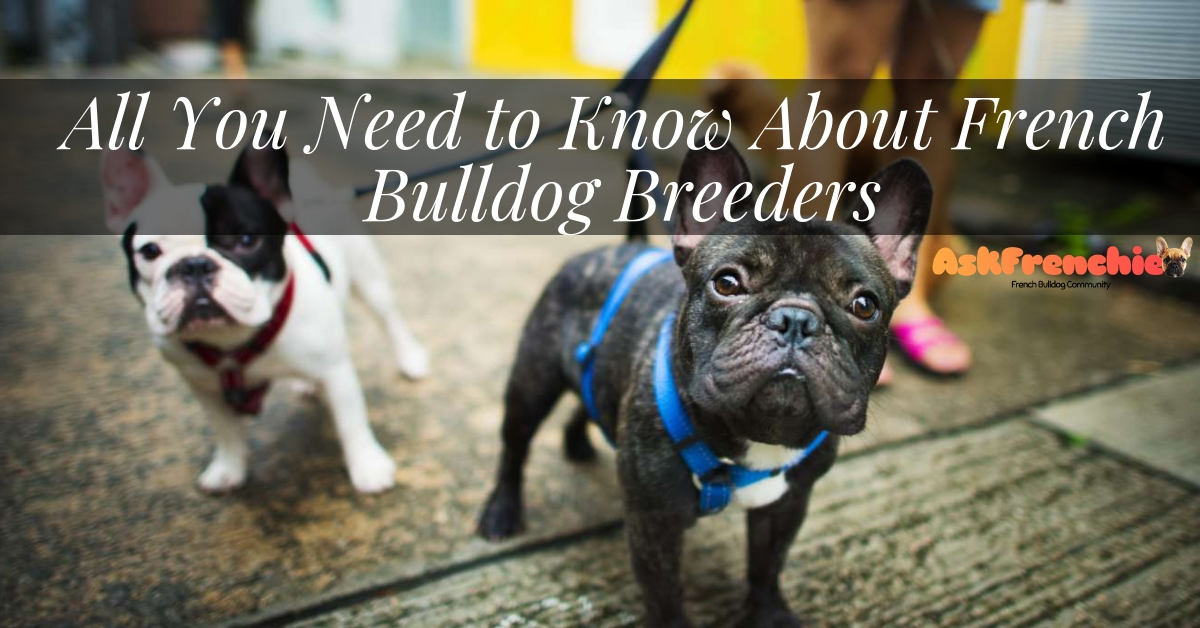 If you have decided to espouse a little furry friend (French bulldog), you must be looking for some best French dog breeders. If it is the first time you are going to be adopting a French bulldog, it is important that you know some significant characteristics about a dog’s breed.

I can understand that you probably have several concerns related to choosing the right breeder, just like me, when I adopted my little Frenchie. Feeling confused before adoption of a pet is a completely normal thing.

That is why I have tried to incorporate all the details relevant to French bulldog breeding in this article. From finding French bulldog breeder to its general characteristics, the article answers some important questions that raced through my mind when I made my pet adoption decision.

If you think this one-of-a-kind, playful and adaptable French bulldog is from France, then you are mistaken. French bulldogs originally belonged to the Greeks. A Grecian tribe ‘Molossians’ bred this large and strong dog for labor purposes.

This breed came out when Molossians bred Terries and Bullendeisser to conceive small and compact version of French Bulldogs. By 1850, there were much smaller and healthier French bulldogs running around.

How Can You Find the Best French Bull Dog Breeder?

Once you’re sure and determined to adopt a French bulldog, the next step is to find a reasonable and reputable breeder in your vicinity. Always remember that responsible breeders never sell puppies to anyone who turns up with cash in their hand.  When I purchased my pet, I was interviewed twice; first on a phone call and then in person.

Not only this, I had to fill out a long survey, questioning about my working hours and living arrangements. I know some of you might think it was way personal, but I perceived it in another way.  To me, it demonstrated that breeder really cared about the puppies. Their concern was to ensure whether or not I would be a good pet owner to the animal.

There are many breeders who purchase puppies from various puppy mills.  With little experience and expertise in dog breeding, the backyard breeders are often guilty of unhealthy and unethical breeding. That often results in breeds with poor temperament and health.

People usually discover these issues after they have purchased a French bulldog puppy. This is another reason why it is important to pay attention when it comes to choosing a French bulldog breeder.

The problem does not end here; I know many French bulldog owners who had to go through a lot due to their one careless decision. Their puppies did not only suffer from genetic problems, but also developed behavioral issues.

The main reasons were backyard breeding and lack of socialization.  Sometimes, it takes a lot of time to reverse this damage. Unfortunately, it may result in heartache, both for an animal and its owner.

Following are the good options to purchase a healthy French bulldog puppy.

Working since 1897, FBDCA is one of the oldest and reputed breeding houses in the U.S. The club promotes quality breeding of French bulldogs and tries to provide a standard breeding environment to them.

The nonprofit organization works under four volunteers who aim to bring the natural qualities of a French dog puppy to perfection.

The dog club is included in one of the top French bulldog puppy breeders. The club considers breeding French dog a family affair and works diligently to ensure all their puppies maintain superior health, lineage and an active routine. They treat puppies like family members with freedom and socialization.

It is another good option if you are considering buying a French bulldog puppy. Located in Washington, the kennel club strives to breed happy, healthy and well- rounded puppies.

Each puppy receives appropriate vaccination and is sold with a guarantee that it will remain free from any congenital defects for at least one year.

The club is also included in the list of best French bulldog breeders. The pups are raised in a family atmosphere and take part in social activities every day.  If you live in Texas, there can be no better option than Blue ribbon to choose a French bulldog puppy.

To a small extent, great breeders are dedicated and honest to their jobs. For them, dogs are just not animals but true companions.  If you are ready to become a pet parent, make sure you follow the given tips when buying a French bulldog puppy.