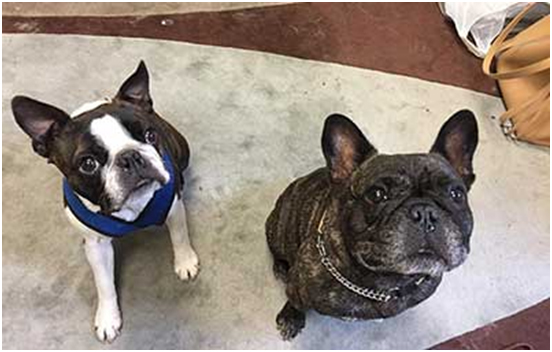 If you are considering buying a squishy-face dog, there are broadly two choices, French bulldogs or Boston terriers. Apparently, the breeds are almost similar, but they have some notable distinguishing features. If you are picky like me, this article will help you buy your desired pet. I have spent hours of research to find out some interesting features that are deal-breakers for many people.

It is no wonder both dogs have incredibly irresistible personalities that promote plenty of snuggling and smiles. Interestingly, these breeds are not doppelgangers of each other. Despite the fact that both canines’ hacker back to local breeds and English bulldogs, their history is not same.

That is to say, French Bulldogs have a bit clouded ancestry that traces back to 1835. An English lace-maker took his toy bulldog to France and interbred with a Terrier Boule and Pugs, resulting in French bulldogs. Boston terriers, on the other hand, have an American heritage and interbred (local bulldog and English terrier) in the last few quarters of the eighteenth century.

Before I dive deep into highlighting the differences between both breeds, let us see what makes them look mirror images of each other.

Apart from different histories, Frenchie is more careless of the two. He loves lazing around with its owner and is often found resting during sports. That means it requires minimal exercises. I take my Frenchie on a short walk daily that makes taking care of it easy for me.

Terrier, however, is an active breed and that feature is what keeps its behavioral issues at bay. He can be your couch potato or a champ of canine sports; he will be shaped the way you want it to be. Its active behavior means the breed needs proper exercise. He can perform great in canine sports like rally, agility, obedience or flyball if you train it well.

Frenchies have an amazing personality when it comes to meeting new people or adapting to a new atmosphere. Although it becomes stubborn sometimes, it is easily encouraged and motivated with reinforcement.

A terrier is rather more enthusiastic, playful, and smarter. This American gentleman gets along well with kids and family pets. It is an attention seeker and socializes whenever it gets the chance. Terrier is a kind of inside dog that lives well in the cool and homely environment. However, leaving it unsupervised can be problematic as it gets bored early and wants some distraction.

Comparatively both breeds have a loving disposition that makes them sweet companions. The sturdy dogs are good-natured and often display overactive behavior, but French bulldogs are more adaptable to suburban sprawl and have a better sense of humor than terriers.