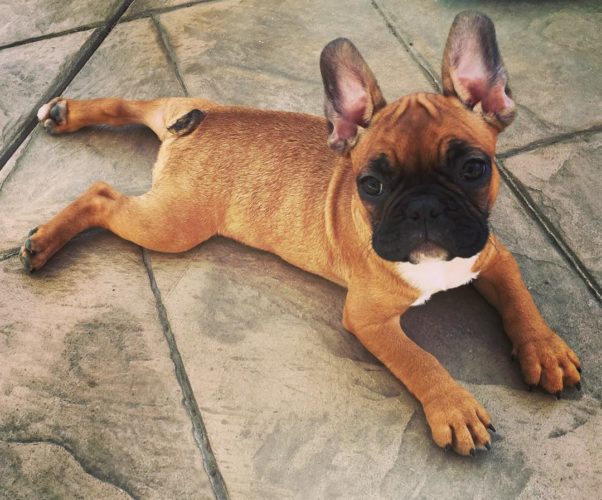 As someone who loves the Frenchie you know just how varied their coat can be, between pups. The Red French Bulldog is just one of the variations in coat color that is seen, and it quite a popular choice. Whether you’re looking to add a puppy to your family, or adopt an older dog, you’ll find that your Frenchie is an amazing addition.

The personality of the Red French Bulldog

One of the best features of our Frenchies is their charming personality. For such a small dog, he sure packs a whole lot of personality into that little body. You’ll find that your Red French Bulldog is funny and loves to play. Whether playing tug with the kids or fetch with a tennis ball, he’ll be happy just spending time with his family members.

The French Bulldog is not an excessive barker, but he is protective of his family. These great little dogs make good watchdogs, and will only bark when there is good reason for it.

With good socialization, starting from an early age, you’ll find that your Frenchie is friendly with people and dogs alike. They also get along with cats and other pets in your household. They don’t have a high prey drive, so your cats, guinea pigs, and even exotics will be perfectly safe around your Frenchie pup.

Health concerns of the Frenchie

Generally speaking, the French Bulldog is not prone to developing many health concerns. Where bigger breeds are prone to concerns like hip dysplasia, the French is not going to be genetically prone to developing it. His short stocky body with dense bone structure typically wouldn’t make him prone to these types of concerns. One particular concern for your Red French Bulldog might be his breathing. On days that are hot, it’s best for him not to overexert himself.

The short snout of the Frenchie can make it harder for him to regulate his breathing on those hot summer days.

Another concern is the potential for ear infections. While the erect ears of your Frenchie don’t make his as prone to infections as his floppy-eared brethren, he may still develop some concerns. The good news is that with grooming and routine vet checkups, your Frenchie should stay happy and healthy for many good years to come.

Frenchies are amazing little dogs, with short smooth coats. They are not known for being heavy shedders, which is great for those of us who live with them. Keeping his coat brushed every week will not only help to minimize shedding but it will also help to forge a good bone with your pup.

Keep his nails trimmed, and use only dog-safe grooming products on your Red French Bulldog.